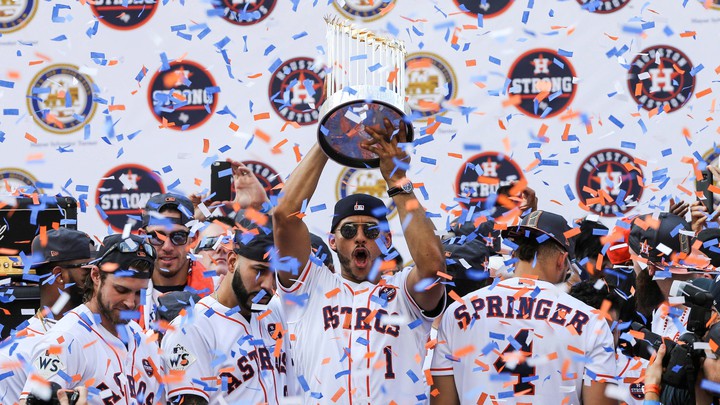 Following Game 7 of the 2019 World Series featuring the Houston Astros and the Washington Nationals, several reports and accusations were released stating that the 2017 World Champion Astros cheated their way to a title.

The Astros have proved to be an elite MLB team for the last three seasons, winning a title in 2017, making an appearance in the American League Championship Series in 2018 and competing in the World Series once again in 2019.

Their dominant run throughout the last three years has been the result of great pitching, solid defense and, most significantly, their ability to hit in the clutch.

Though the big question all baseball fans are asking is: Are the Astros’ hitters really as clutch as they appear?

MLB writers Jeff Passan and Evan Drelich released statements that called out the Astros for cheating throughout the 2017 season including their dominant postseason run that year.

The MLB began an investigation immediately and have discovered several video clips in which the sound created by the trash cans are very clear and quite obvious.

During the September 21, 2017 game between the Houston and Chicago, White Sox pitcher Danny Farquhar called a timeout after suspecting the Astro hitters seem to know every pitch he was throwing. Game video showed he looked into the Houston dugout because he heard the loud clanking of a trash barrel prior to each of his off-speed pitches.

As part of the investigation, the MLB filed a nine page report which contained the names of those who were mainly involved in the scandal. Astros manager AJ Hinch was listed as well as General manager Jeff Lunouw. However, the mastermind behind the operation, according to the reports was current Red Sox manager and 2017 Astros bench coach Alex Cora.

Cora led the Red Sox to a World Series title the following season in 2018 with Boston, who is now being accused of a similar cheating method.

On Monday, MLB announced that Jeff Lunouw and AJ Hinch would be suspended for the 2020 season. The Houston Astros responded by dismissing both Hinch and Lunouw that afternoon.

The following day, the Red Sox decided to do the same with Cora, even before his punishment was released by the MLB.

Many Warde students have opinions on the scandal as it is trending all over the news and social media.

“It is really bad for the game,” Fairfield Warde senior baseball player Jack Pierce, said. “These highly respected teams, coaches and players who set examples for young fans have cheated their way to a championship. The punishment that has been placed is deserving.”

For some, the Astros cheating scandal has even more serious consequences.

“Players shouldn’t be able to get away with it,” said Warde senior varsity baseball player Anthony Espinoza. “Nothing happened to the players at all and that’s just not right. Players lost jobs because of the Astros and the way they cheated. Now some players are out of work. That just isn’t right.”

Beyond the Astros, it will certainly be interesting to see how MLB decides to punish Alex Cora. Some speculators argue that Cora deserves a lifetime ban, while others believe what he did wasn’t so illegal. MLB has yet to come to any final conclusions on Cora and the Red Sox alleged cheating in 2018.

Regardless, this issue will likely come to an end amongst Major League teams as the punishments placed so far will scare teams and coaches out of cheating like this.

But, until MLB concludes all of their investigations and renders any additional punishments against other teams, fans will likely enter the 2020 baseball season not fully knowing the long-term effects this scandal ultimately will have.