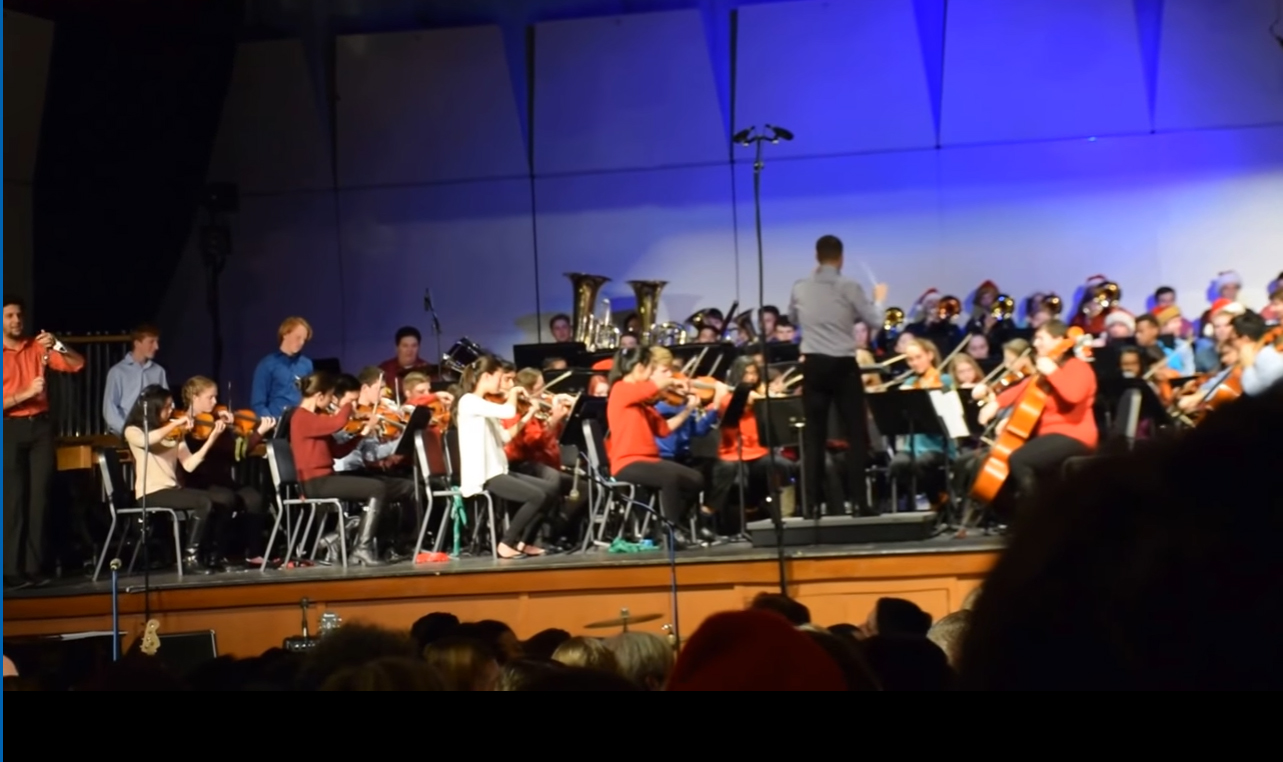 Music isn’t the only thing that’s in the air.

Carillon is a time for all of Warde to come together, a time to listen to the orchestra, band, choirs and small groups perform everyone’s favorite selection of holiday songs.  It’s a tradition that everyone looks forward to.  The lights flashing, the loud brass, the candle-lit songs, the continuation of nearly perfected music that seeps into everyone’s ears for a joyful hour, makes Carillon one of the biggest events of the year- a relaxation period to listen to music and get out of class.

But for the performers, it is quite the opposite.  The countless hours of rehearsing, the late nights, the lessons, the spending everyday in the respective music rooms since early October learning the music for the concert in December, to make sure the rest of the Warde student and faculty body have a wonderful experience.

Regardless, the students involved love it and wouldn’t trade it for any other experience.

“Carillon is not just for the audience, it’s for us, too,” says Camille Pitaniello, a viola player in the Symphonic Orchestra who has been part of Carillon for the past 3 years says.

And others would agree.

“I’ve been looking forward to my senior year Carillon since I was a Freshman,” Bel Canto singer, Paige Socol, adds on.

When the pandemic hit the US, it was evident that Carillon would not be happening this year. Scientifically, it has been shown that singers with masks must stand six by nine feet apart to sing for a limited time of 30 minutes and then leave the room they were singing in to let any particles settle in order for it to be safe for everyone involved.

In fact, this is exactly what is happening at Warde.  All choirs have these boundaries and choir director Lauren Verney-Fink has to stand behind two large plastic barriers to conduct and play piano without the possibility of any potential coronavirus particles coming in contact with her.

This being said, having more than 200 people in the auditorium to rehearse for 4 hours a night every other night for 2 weeks leading up to the concert would be hazardous for everyone’s health.  In addition, half of the respective ensembles are in Cohort A and others are in Cohort B, making practice time as a full group limited or nonexistent prior to those big group rehearsals with all of the ensembles.

It would be unsafe to put together a concert for the student body and faculty, let alone all of the parents, siblings, grandparents, and other relatives who would come to see the show.  Some would say it is virtually impossible to do.

But, virtually may be the word.

Although plans are still up in the air, Band director Mr. Marsland hints that a meeting is coming in the near future to solidify Carillon ideas. This along with the announcement that the respective ensembles are switching to Christmas music sooner rather than later gives many music students hope that Carillon could take place, although they are not sure how. An online concert hints at the idea that Carillon could be a collection of online performances.

Currently, Warde choir is working with Ludlowe choir to put together a collection of songs performed by various ensembles with the theme of “Processing the Pandemic.”

In order to put this together, students will submit various voice memos of the vocal parts they are singing to then be edited and mashed together by a professional audio engineer, accompanied by lip-synced recordings of the students singing to complete the video.  The only negative is that this is extremely time consuming and difficult to do.

Wouldn’t it be even harder with a whole school of different music ensembles sending recordings upon recordings to be edited and ready before the holiday break?

This question was posed to a few music students, accompanied by a few exhausted stares and the shaking of heads, maybe even some laughter.

“Of course,” Pitaniello said.  “It would be harder than the normal rehearsals. The thing that’s fun about it is performing it live rather than doing it pre recorded.  If it’s in person, it has more of an effect.  I don’t want to record— it takes the magic away.”

“As much as I want to do Carillon, I’m beginning to think it shouldn’t happen,” Socol added on.

Many students had ideas on what they believed would work for Carillon.  Among these ideas were doing the concert outside, using masks and microphones, having everyone come in their cars like last year’s graduation ceremony, or in the stadium with speakers.

Yes, it wouldn’t be ideal with the cold weather, but is there really a better option?  That’s up to the teachers to decide.

“It’s a little too soon to be able to discuss it.  We should know more info and be able to share more in the next two weeks,” Mr. Marsland said.