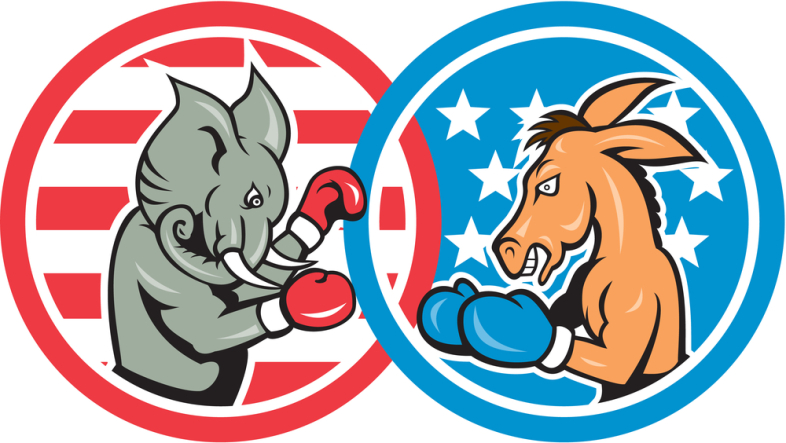 The American people have a certain melancholy disposition to our primarily two-party system. While some cling to the values of their party like a moth to light, others distance themselves like a vampire from an Italian restaurant. For the rest of the population, declaring a political party waters down individual opinions to those of the masses, some of those which you may not agree with. The main side effect of this comes from being blamed for your party’s actions.

“I’ll have a decaf Americano.”

“Oh, we don’t believe in decaf. Is it alright if we frame you for tax evasion?”

In this situation, not only are decaf-coffee-drinkers known for not paying their taxes, but because you grouped yourself in with them, you’re Americano-less and going to jail.

Because of this imminent threat, many choose not to vote.

“Voting doesn’t matter! The system’s rigged,” they say, “Wanna go to Spencer’s gifts?” they usually add. These pseudo-intellectuals, among their other non-voting cohorts, account for 43% of the eligible voting population. While the notion that votes don’t hold much value due to the electoral college does hold weight, performing the simple, civic duty of voting is what separates us from totalitarianism.

For those who take a “lesser of two evils” approach, third-party candidates seem like a viable approach to politics. However, with our newest batch of prominent third party candidates, this mentality may need to be reevaluated. This group includes Libertarian Party candidate Gary Johnson; self proclaimed mountain freak and resident Syria expert, and Green Party candidate Jill Stein; a vaccine-fueled seesaw and hardcore hooligan.

While Green and Libertarian are the most popular and well-known of the third parties, many smaller, unknown parties grace our democracy. The “Rent is Too Damn High” Party and “The Marijuana Party” are just a taste of how this criminally underused and easily manipulated this system truly is. It is surprisingly easy to create your own political party, which also poses the threat of undereducated and twisted individuals to hold political power.

So where do we as a nation go from here?

The solution is simple: A Slumber Party. Rather The Slumber Party: The Party For Party People, Where Party People Party for Political Power™ . The Slumber Party’s political platform revolves around using third-party loopholes to make the people’s voices heard (as well as being made from reclaimed oak). Recently, the Federal Election Committee has threatened to punish those who run for office satirically, as candidates such as “Deez Nuts” and a Ficus Tree have made it onto ballots. However, The Slumber Party is not a satirical party, rather it is a religiously based political party. The Slumber Party is derived from my new church Our Lady of Sasquatch Confirmation, where I, the mega-minister, educate the youths on the legend of Bigfoot through the teachings of New Yorker magazines. And thus, our beautiful underaged-church-state hybrid is highly legal and highly untouchable.

Additionally, in the neglected world of third-party politics, there is no set age minimum for third-party representatives. Meaning that, I, Erin Harrington, unable to vote, can create and run The Slumber Party and be on actual United States ballots in as little as three months. While I would not be able to serve in office, I can legally blaze a campaign trail while being under the legal age to be Commander in Chief.

Due to the beliefs of The Slumber Party, it would be heretical not to take advantage of this cult-escape-clause. Thus, The Ceremonial Ritual must be performed.

Before the barista has time to frame you for tax evasion, you lift your bucket hat to reveal a collapsible katana. You lift it above your head, fear and adrenaline coursing through your veins. Your Brother in Squatch looks up at you, their eyes dart down in defeat. They know what they must do. The barista lifts their sneaker onto the counter and speaks shakily:

In one swift motion, the foot is amputated. Your brother is one with the Squatch. You both shake hands, thankful but pained.