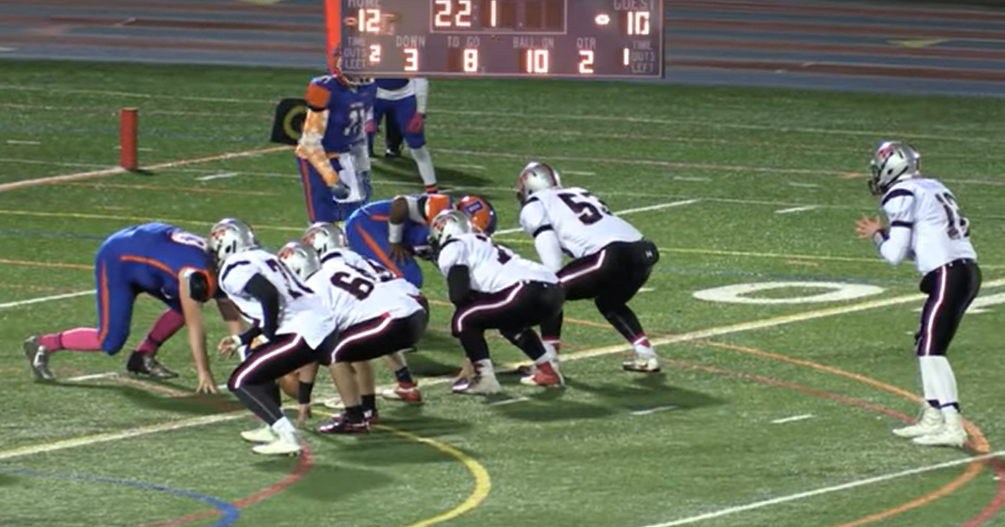 As he warms up on the sideline throwing the football to his star wide receiver Connor Burt, Andre Conklin shakes from the fear boiling inside him.

But, as the game begins with the first hike, the nerves drift away and he starts to get into his groove. With parents and students roaring in excitement to see the new starting quarterback, the game begins.

After the unfortunate suspension of senior quarterback, Joey Gulbin, Andrew Conklin stepped up from playing JV football and was truly tested by being thrown into a varsity game against one of the toughest opponents, New Canaan.

Conklin, while down on the team’s loss, saw many encouraging positives about the Mustangs perfromance against New Canaan.

“The game was a tough loss, but we played better than what the score reflected,” said Andrew Conklin. “It was my first game so it was a good experience for me and we thought we played well as a team.”

Conklin had a impressive 60% completion percentage with roughly 300 passing yards, despite 2 interceptions.

As the game concluded, he felt as he could have done a better job with making better pass decisions. However, he believed that it was a great experience for him.

“I thought we played well as a team, but just didn’t convert on some plays,” said Conklin.

With this big chance for Conklin, he was more concerned with how well the team performed. This trait of being a team player and desire to create a bond with his teammates makes Conklin a great player for the program.

With Conklin creating a huge fan base of supporters, some even wanting him to become the new starting quarterback, the odds seem to be tipping towards him taking that position from Joey Gulbin.

When fellow teammates of his were asked about his performance, the results were only positive.

“Well for his first start on varsity, I think he played really well with over 300 yards passing and when the pocket did collapse, he didn’t panic,” said starting cornerback, Elijah Meade.

With his fellow teammates and students supporting him in a positive way, the future does look bright for Conklin.

When asked about the future of the quarterback position, Meade seemed to believe that this question will be answered based off of this week of practice.

“Maybe, it all depends on this week’s practice,” said Meade.

When some students and players criticized his performance, Meade seemed to jump to the defense of his quarterback.

“With him throwing 2 interceptions, it was his first time on that stage and every rookie quarterback will make those mistakes,” said Meade.

And, with the new motivation of having the chance to start for next week’s game, Conklin will work harder than ever before in hopes of becoming the new starting quarterback for Fairfield Warde.

With his unceasing hard work and dedication to the program, Conklin is always ready to play and help the Mustangs win.