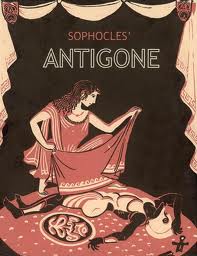 This year, Mr. Frattaroli is directing the play “Antigone” for this year’s black box fall drama performance. He has decided to direct  the more modern version of this tragedy which is spoken in modern English.

The story of this drama begins when Antigone refuses the Creon, the king’s, orders of not burying her brother who has been killed. Antigone tells her sister, Ismenê, that she will not put up with this and buries him in dignity. The king discovers Antigone’s plan to bury the body and declares that Antigone will be put to death. Haemon, the king’s son and Antigone’s fiance, tries to tell the king to change his mind. They got into a huge fight and Haemon vows to save Antigone.

Antigone struggles with facing her own death, but is finally immured in a cave where she will starve to death.  Instead, she hangs herself. And Haemon, who has hidden in the cave kills himself in grief.  Creon is devastated when he hears the news of not only their deaths but also his wife who has killed herself when she hears her son is dead.  Creon goes on knowing his life is now meaningless.

Tickets are available at the door and sell out rather quickly because there is limited seating. Every ticket will cost 10 dollars. Tickets do sell out, so if you need to reserve seats, you can email Mr. Frattaroli and tell him how many seats you need to reserve.