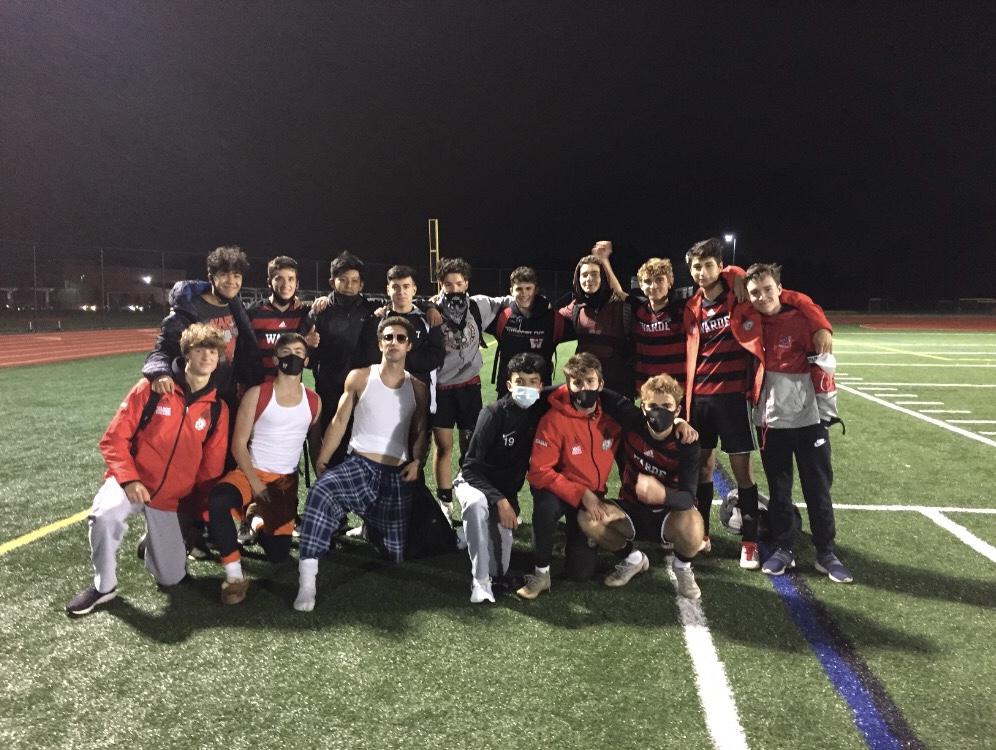 The Warde boys Soccer team was silent and focused before the starting whistle against Prep, as is expected for every game. This meditative approach is played out on the field with or without the scoreboard.
Co-Captain Sean Rodriguez explained that playing in a difficult conference called for determination more than anything else.
“We knew going in we weren’t going to be the best technically so we went in making sure no one would outhustle or outwork us. We were going to battle them every time so they’d walk away saying ‘Warde is a great team.’”
The Warde soccer program had never played Fairfield Prep, a team which was 7-0 and armed with a new coach.
Warde aggressively fought for every ball on the field of mud. Rodriguez described the game as “a really fun, scrappy battle.”
The Mustangs came through with strong breakaways, but never got the ball on goal.
“We’d defend really well but send it up and no would be there. The main issue is that we would make opportunities, but the touch wasn’t there.”
Skill with headers, communication, and spreading the field came through. The team might not have had the footwork of the other teams in the conference, but they made up for it by utilizing every player.
Goalie Andrew Jones and his veteran defense returned this year stopping close calls and leading the team on the field. Underclassmen Matiz Beretta, Kevin Millington, and Eric Jara stepped up offensively and defensively. Among others, they will strengthen the team’s prospective future.
Warde lost 1-0 from a penalty in the second half. In reflection, Rodriguez credited the loss to speed. Prep was older and faster. The skill was there, but they could beat Warde down the field and recover quicker. Still, Warde was grateful for the chance to see how they matched up against local teams that housed players many of the athletes knew from soccer outside of school.
“We were able to show everyone that Prep knew they walked away lucky.”
Many of Warde’s losses were close this year, particularly the season opener against St. Joe’s.
The ball crossed the goal multiple times and even hit the crossbar twice in 30 seconds, but the team just couldn’t finish. The inexperience of the team showed, passing prematurely without the speed to run onto the ball for goal.
“We jumped right into the season and never really had time to get the chemistry going or make a game plan.”
For the first time in at least seven years, the score ended in the Cadets’ favor (0-1).
“It was the story of the season. We played so well and they had almost 0 chances to shoot.”
The team kept up in practice to beat St. Joe’s 5-0 on senior night, less than a week later.
Rodriguez aimed to show up with confidence and style to the game, after aiming to be the best.
His past 4 years on varsity came from dedication day and night since middle school. His relationship with soccer is pure, simply between him and the ball.
Now in the Warde Hall of Fame, soccer served as “a platform where I could differentiate myself.”
Rodriguez shared that “The easiest thing about sports is that as long as you work hard, you’ll be good. That’s all it takes.”
His advice reflects the dedication and passion the team brought to each practice that got them through this distinctive season.