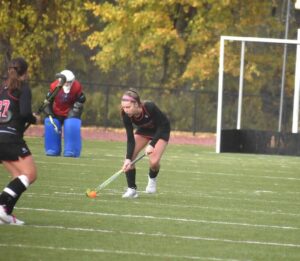 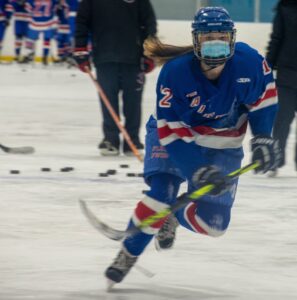 On the field or rink, Caroline Pratt is a pensive, communicative player.  Her awareness is a floodlight, revealing the quirks of her opponents for a smooth interception only moments later. It is most notable, though, that she enjoys every second of the game and the hours in between, regardless of whether it is field hockey, ice hockey, or lacrosse.

In recent years, more high school athletes are “specializing” in one sport. The University of Wisconsin School of Medicine and Public Health reports that these students are twice as likely to report a lower extremity injury than those who play more than one sport. They risk burnout, and according to the American Sports Journal of Medicine, “students who play one sport for 8 months annually are three times more likely to have an overuse injury in the hip or knee when compared to multi-sport athletes.”

Playing multiple sports is proven to have unmatched benefits which Pratt knows firsthand.

For a freshman athlete, adjusting to practices every day alongside homework can be overwhelming. Simultaneously playing three seasons, club lacrosse, and viola, Pratt – who is also a NHS student – was forced to pick up strong time management skills that will stick with her for life.

“When I commit to a goal, I always want to see it through. There were times it was challenging to manage my academics and athletics but once I learned to balance my time properly now when I think about it it’s like nothing.”

Pratt seems to be electrified by the humming activity of three sports, with an untainted, potent love for being out on the field (or rink).

“I’m just psyched that I play three sports. I wouldn’t trade it for anything… I’m really grateful for all the experiences and every season I have from here on out. For any freshmen coming into high school I’d recommend playing three sports their freshman year and see how it is because I was really thriving in that environment. ”

Her appreciation for the game is youthful as she expresses gratitude towards all her teammates and coaches. Through her different teams, she was able to practice leadership and value the emotion of sports. Her hard work and dedication translates into everything she does.

And it’s made her a versatile player. The variety worked different muscle groups and challenged her way of looking at the game. Her extreme reaction time to stop goals in the air or whip the stick down to receive a pass will catch a spectator’s eye with its rarity.

During a 2019 field hockey game against Darien, the team was barraged with defensive shots as a heavy rain storm disoriented the team further. Warde let up a goal in the 3rd quarter for a neck and neck game against one of the state’s top teams. Pratt subbed in as defense and was going to switch with a player into her usual midfield position. However, Pratt immediately read the field and helped take control of the game as a defender. It was decided that she would stay there the rest of the game.

Despite expressing her nerves and confusion, her sharp tackles and quick eyes relieved the team as she was able to clear the ball up the field. After this, she became a defensive starter for the rest of the season.

With her try-anything attitude and reliability, Pratt’s ice hockey coach also offered her the position of forward in the middle of one of this year’s games.

Her ability to do this, she says, helps her understand as a lacrosse goalie the difficulties a defender might have dropping back to protect the goal.

“Once you play multiple sports, you actually start to draw parallels and you find things that are similar. There’s just a lot of specific consistencies through all of them.”

Surrounded by family and friends, Pratt first got on the ice at age three, adding lacrosse in third grade, and intermixing field hockey throughout middle school. Each sport serves a different purpose to her.

“I’ve always approached field hockey as a way to have fun.”

Ice hockey, on the other hand, was a chance to be part of a community outside of school.

“I just love being on the team because it requires specific skills which is for most people the hardest hurdle when entering the sport.”

As for lacrosse, Pratt played with the freshman, JV, and Varsity teams her freshman year and is now a captain.

“It is a competitive, fast paced sport that is more high intensity and personal for me. As a goalie, the feeling of making a save in a game is incredible. ”

It is obvious that Pratt has always had a zest for variety and will continue to take advantage of all different opportunities as she attends and plays lacrosse at Williams College this fall.

Looking forward to her growth on the field, Pratt sees with excitement that “there’s more to come.”

Her commitment developed from a curiosity, which she actively allowed to flourish in high school. Conclusively, there’s no drawbacks in leaving no stone unturned.