(FAIRFIELD) The bustling halls of FWHS are full of life and splendor. The echoes of students giggling and teachers teaching fill the school with a human symphony. Such a place is very infrequently a place for crime, let alone that of a federal offense.

On Friday, April 30th, the Federal Bureau of Investigation, Drug Enforcement Agency, and the Fairfield Police Department forcefully entered the grounds of Fairfield Warde High School, with a search warrant for several classrooms, including the Printing Lab in A-Wing. It was thereafter discovered that a massive crime ring had rooted itself within this public institution, among which an elaborate counterfeiting scheme was discovered.

Since the crack down, many new details have come to light. It can safely be said that the school is a changed place now; teachers have been put on leave or fired, students have been expelled, and there’s even an inexplicable lack of cafeteria food being prepared. Regardless, much of this ever evolving story is publicly known and will thus be relayed to the readers. In a release from the police, the following scene in the graphics lab was described:

Although the door to the graphics lab was unlocked, the PD busted open and broke through every possible entrance. At the sound of windows shattering and wood splintering, roughly two dozen officers entered the room, brandishing their weapons. Upon entering, the immediate screams of underclassmen were jarring. A class of 18 underclassmen was in session. 14 of these students were escorted outside, at gunpoint.

The remaining four students were further in the back of the classroom. None of these students heard the raid due to deafening music being played through AirPods. The officers quickly approached and saw several massive sheets of 24 x 36 inch paper laid on a table, with USD printed all over it. 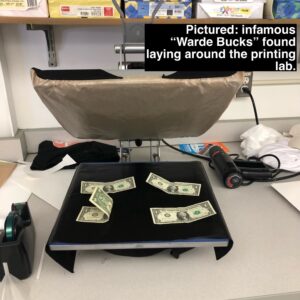 The report went on to describe the counterfeits in great detail. The colloquially named “Warde Bucks” (as many FWHS students have taken to calling it), was printed in sheets of bills ranging from $1 to $100. The material it was printed on, a grainy linen similar to cash, could barely distinguish from a non-counterfeit bill, besides the fact that a Warde Buck had a slightly grayer hue. The printer creating all of this money, a machine the school had bought in 2007 and said they would replace in 2016, had seemingly run out of yellow and cyan ink. The police report detailed the remainder of the raid:

The eldest member of the group, a student named [REDACTED] was the first to notice the officers, immediately yelling “Flee!” After being detained and arrested, the students eventually broke and revealed that their teacher, Mr. [REDACTED], had allowed for the crime to take place. Mr. [REDACTED] was later taken into custody at a country music concert at Toad’s Place in New Haven.

Many have speculated as to why this elaborate and laborious scheme was concocted. This has, of course, occurred after several months of Fairfield Public Schools freezing school budgets’ town wide. Ranging from cryptocurrency to protesting against the Board of Education, the rumor mill has been running its course here at Warde. That is, until an interview was conducted with the eldest student detained, [REDACTED], who will remain anonymous. Here is what they had to say:

“Why did we do it? There was no specific reason, but we mostly did it because we could. It took about ten minutes for us to realize we had the materials needed to counterfeit and five minutes to amass more than fifteen hundred dollars in bills. The true test was seeing whether or not the bills would be accepted, which of course they were. That day we started printing, I bought four chicken sandwiches in the lunch line. It was great.”

At this point in the interview, the student stared longingly out a window. Since being expelled from school they had become increasingly lonely, and now face the prospects of legal pursuit as an accomplice in a federal crime. After a brief moment of pause, they continued:

“I printed all that freakin money so I could pay my way through college. All these damn applications and visitations cost so much money, and I haven’t even begun to think what loans will look like for me. Did you know that college loans and debt are classified as a crisis in America? Everyone owes so much damn money, it’s unbelievable. The only logical choice seemed to be to counterfeit. I really don’t see anything wrong with it.”

After the police raid, the operations were permanently put to rest. The 14 year old printing machine, which had been paid for by taxpayer dollars, was taken towards the dumpster and destroyed so that no one could dare make any more money. That said, at the rate the lab was printing at, it’s assumed that as much as three hundred thousand dollars had been printed, only ten thousand of which was seized by the police.

Regardless of the questionable morals regarding this highly articulate crime, the school and town wide community has been reshaped because of it. Any person carrying cash can often be seen squinting at and rubbing it, attempting to discern whether or not it is a Warde Buck. The Fairfield Police department is said to hold a counterfeit dollar shredding sometime next week. In response to the wild crime, students and teachers were given a week off from school without pay, resulting in the termination of many educator contracts thereafter. In wake of all this upheaval and change, the lone printer [REDACTED] still has hope.

“We changed the community,” he said with a glimmer of hope in his eyes. “Maybe next we can change the world…or not. Who knows! I just wanna be able to pay for stuff. Speaking of, can you spare some change for gas money?”