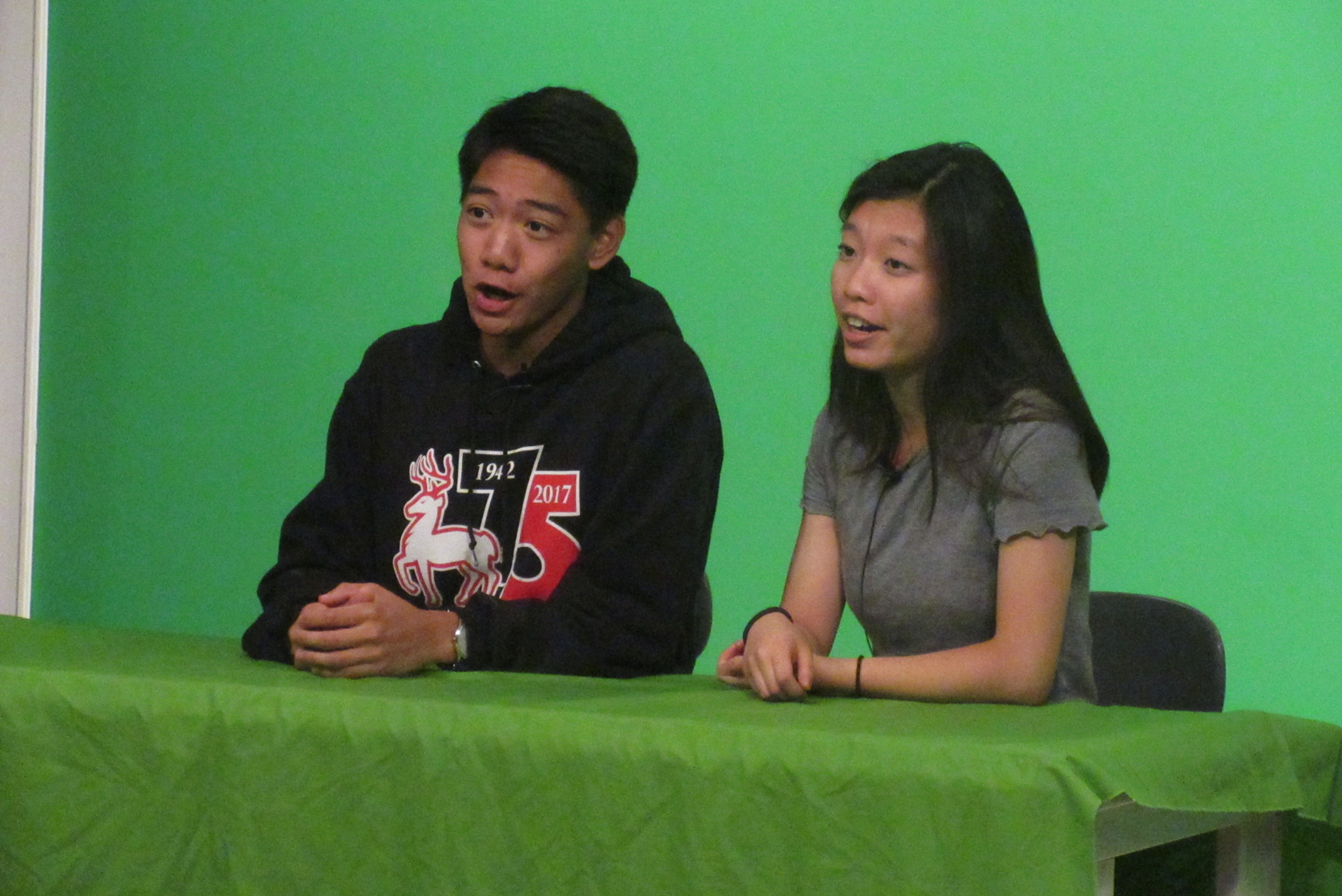 Starting from its debut year, 2006, WardeTV has since then been a student run broadcast program advised by Ms. Gartsu keeping the school’s community informed and entertained with its latest news and events.

Well into their thirteenth season, new cast members take the stage. Seniors Liam Inchoco and Amy Li have been selected for this year’s anchors and enthusiastically fulfill the role’s lead.

But what does that take? To be in front of a camera formally presenting, to virtually the entire school, updates and activities every week. What sort of energy and confidence fills that image representing the face for the program?

It starts off with an audition. One does not need to actually be involved with WardeTV throughout their entire high school career to assume this position.

With the thirteenth season underway, Liam and Amy quickly learn to get comfortable in the broadcast environment since it’s their first year working with the show. This realization, however, does not necessarily disqualify them to attain the role. Various hands of talent are on board. Whether it’s behind the scenes such as directors, camera operators, script writers, or editors, everyone on the staff contributes to produce a successful episode. That includes the anchors, playing an essential role as the presenters for this collective effort.

“We were one-shot-wonders,” said Amy Li, describing her and Liam’s experience in the audition. No retakes had to be filmed for their performance. On top of that, they were the first duo to try out while the process was still in its testing stages.

While the latter groups had a pre-written script in front of them to act out, Amy and Liam had to nearly improvise while they read their lines on a fast moving teleprompter several feet away from them. The second time they were able to actually write their own script. In both auditions no retakes had to be done.

This seamlessly natural talent to entertain and present doesn’t derive just from out of nowhere. The anchors share how they developed confidence in the school’s culture by always involving themselves within clubs and extracurricular activities. Both being a part of the fencing team and debate club, the progression to grow into the role as anchors eases inherently.

Liam Inchoco also expressed that his adoration for being a lively performer has existed since elementary school. That same onstage energy follows him in his daily life, enthused to delight others with light hearted connotations. His sisters would also mention WardeTV to him in his younger years so the essence of the program had been exposed to him much earlier.

Amy Li comments that being personal friends with Liam makes this adjustment go by comfortably. The energy formed by them indicates how the show will go on this year. “We’d like to make the audience feel as if they were a part of the conversation… last year’s anchors were more stoic,” she states.

It became clear last year that the comedic relief for the show relied heavily on the weather team. With their loose script, last year’s team “pushed the boundaries,” that the faculty of the school did not completely approve of, according to Liam. A parody video made by that weather team was leaked in an email chain to the teachers after they graduated, causing a hysteria of offense.  “There is a fine line between humor and disrespect,” he continued, “They had the right idea but didn’t approach it correctly at that point.”

Despite the parody video, the weather team made Warde students excited every week for a new episode while working on the show. By having more control for the direction of the show, the presentation and humor was in touch with what students wanted to see. Both anchors for this year’s season are determined to expand that energy beyond just the weather team.

To them, WardeTV is not just a news platform. Nor is it a slapstick comedy of “faceless humor.” It is a production where students are given a platform to be themselves and connect with each other on different levels.

“Any kind of news is a means to distribute info,” states Amy Li, “but it should be entertaining [to show] unique school spirit.”