The school devolved into chaos as the “phone-free day” deprived hundreds of students of their vital lifeline to the outside world and their Instagram accounts. The day began with some withdrawal symptoms amongst some of the student body, but the desperation spread as people realized they couldn’t keep up their streaks. By the the beginning of period two, multiple students had already smashed the glass facades of the front of the school to escape the tech-deprived confines of Warde.

In an attempt to alleviate the students’ suffering, the administration provided music during passing times. These songs, all played off of Mr. Ebling’s iPhone 4, forced students to be a real-life Shazam App.

The main office received over 400 calls from parents, concerned about their children’s unresponsiveness to their many texts and the inability to see their child’s exact location on Life360. Administrators were forced to run into classes to verify the safety of “precious Johnny” and other students.

In a last-ditch attempt to hold back complete anarchy, Dr. Toni Jones informed her Twitter followers that all Fairfield Public Schools were being released from school early. However, no one within Warde was able to see the message. Without access to their phones, students and faculty (other than Mr. Ebling, who did not know how to use twitter), could not see Dr. Toni Jones’s message. The school devolved into groups of rival gangs battling for supremacy over the computer labs. 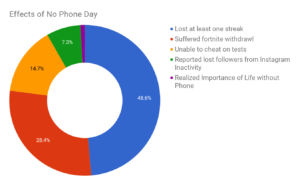 Owen Polley, leader of the “Horatian Satire Gang”, is quoted as saying “we’ve been holding at the Fitts staircase for the last hour, but the A-Wing people have got a wooden tank that’s been pushing us back. We can’t lose control of the Fitts computer lab, Halo team-matches are all that’s keeping us from going insane.”

As the school day ended, emergency personnel rushed into the hallways to carry away those maimed by the fighting and to provide emergency rations of iPhones.