We’ve just entered the third term of the school year, wrapping up the first half year courses from term one and two. One of these courses included Acting, most commonly populated by the class of 2019. Members of this class have been part of many theater productions here at Warde, including The Three Sisters, Into The Woods, As You Like It, and the upcoming City Of Angels. Most of these actors/actresses have been part of this class since freshman year and have solidified it as one of the exciting electives at Warde.

I recently got a chance to talk with James Kolakowski, one of the most passionate members, about the class.

Q: What’s your personal history with the class like?

A: I only just started acting junior year by taking freshmen acting class first half and sophomore second half. This year I took the junior/senior level class.

Q: Could you describe how your experience has been overall?

A: Exclusively positive. It’s an environment where you’re taking emotions that you normally wouldn’t have control over and dip into them like paint, utilizing them for something greater and something that makes sense out of what you would normally do. I’ve always been a bit clownish and I think taking that class made me a smarter clown. I pay more attention to what I do with body language and I put more thought into the jokes I tell and general truths overall. I think it’s given me better control over how to use my body, face, and voice to get out what I want to say.

Q: Having seen the class’ school performances such as Into The Woods and The Three Sisters, I’ve noticed a certain kind of chemistry that the usual cast has. What are your thoughts on this?

A: There’s definitely a certain camaraderie that we share like weathered veterans coming back from battles. Every play has a unique dynamic, specifically with my grade we are in a lot of the same classes. There’s like a secret society aspect to it. What I mean by that is that the department is very talented, but despite that, we are not very well known. It feels like it’s our own thing. We’re not the football team, we’re not the cheerleaders, we don’t get a uniform that we get to wear. We’re more like a Breakfast Club of the weird kids who like to cry in front of people onstage.

Q: What is it like to wrap up the half-year course as a senior?

A: I feel like I’ve been through the mourning process already. I’ve done a lot of and have always preferred plays here. They gave me more opportunities to form as an actor. The ending of the most recent play, The Three Sisters, was really the actual catharsis that I went through. Knowing it’s all over is difficult because I’ve always been doing it with the same faces. They’re not going to disappear, but the last play felt like an end to it and the musical now feels like a victory lap. (SPOILER ALERT) At the end of The Three Sisters where my character was about to die, he was saying goodbye to the character Irina, but in my mind, I was saying goodbye to the cast, the black box theatre, the whole class, and the few months we had been spending on it. It was very meaningful.

Q: What moment would you say defined your experience in this class as a whole?

A: In my final monologue as King Lear, I performed it during class and it felt all wrong. I retraced my steps and did it over again and I think it was my best performance of it. While playing Tuzenbach in The Three Sisters, my turning point was during a rehearsal when I had spent months where I practiced this one scene that was very moving and I auditioned for the part with it, spending a long time on it. I got the part but when it came time to do that scene in the play, I hadn’t felt like I had matured or grown since I’d last done it before the summer. I spent months trying to make it more real, to make it mean something. I started to find myself coming closer and closer to my last play and that struck a nerve with me, adding more meaning. During a rehearsal, I delivered my final line that was very emotional. And then I was asked to do it again but differently. After my second go of it, Mr. Frattaroli started sobbing and I suddenly understood what the scene really meant. That was when I knew I needed to be an actor. When you act, your emotions have a mind of their own. The emotions themselves proceed your performance. For my final, as a goodbye to the class, I took lines from every performance I had ever done and organized them into a collage, flashing in and out of identities and characters, starting with my first acting monologue and ending with Tuzenbach. It was one of the proudest things I had ever done.

Q: What do you hope for the next generation of acting kids that come after you?

A: There’s not as much participation in the class this year as opposed to previous years, however they are still very talented people. It’s strange because it’s always been our class. We’ve always been a big spike in population. While we leave the department in few hands, we leave it in capable hands. We might need more boys though. 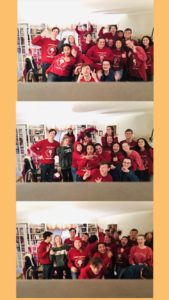