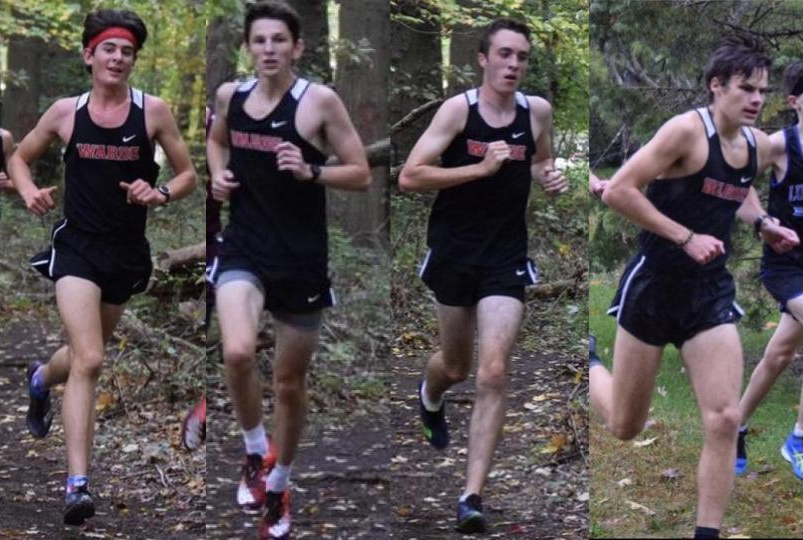 There are a few important factors in running with the Boys’ Cross Country team. Captains Will Robertson, Zander Egravari, Nick Munteanu, and Ethan Kohn revealed some insight on how they got to their impressive 5-1 season this past fall.

It’s clear a big part of winning is simply showing up. According to Munteanu, “Cross Country is one of the most welcoming and determined sports teams out there. You can join the season late, but it’s all about your work ethic when you get there though.”

Covid- 19 made it hard to find motivation to train over the summer, an important part of success early on in the season. Altered workouts and inability to bond over weekly chocolate milk and bagels (for safety reasons) meant the captains had to build morale in unconventional ways, such as socially-distanced team push-ups. The boys still pulled through, averaging 50-60 miles a week during practice.

“We all had to step up and work harder to achieve the similar results that would’ve been easier to get in the past.”

Egravari stepped up in one such meet in the freezing rain against Ludlowe. Right when it looked like Warde would break their over 100 meet winning streak, the captain overtook three other runners halfway through the meet. The rare finish gave Warde a satisfying 2 point edge over our rivals.

“One thing that’s often overlooked is that for any other team sport if someone on the field is tired, you can sub them out. For XC, once the gun goes off, that’s it. You’re in it for the long run. If you drop out, that’s a huge hit to the team that they will not be able to overcome,” pointed out Egrivari.

It’s about where one fits in on the team, knowing to keep an eye on their own part of the race rather than the personal goal of outrunning a teammate. Kohn expressed this was a hard lesson the sport taught him.

“It’s a lot about learning to deal with your own ego and putting others before yourself. It’s taught me a lot about myself, as I think it has for all of us.”

Robertson expressed that the biggest part of the sport is simply supporting each other. When he was injured for his last meet, he showed only gratitude in togetherness.

“I was just happy to be there with the team, supporting them, and cheering them on.”

3. The only outlook is a bright outlook

The pod championship win was just out of Warde’s grasp this year. Nonetheless, the captains accepted the loss in understanding.

The upward trajectory of Boy’s XC is expected to skyrocket. Four years ago, the team was 6th in New England and 2nd in the State. The strength of the lowerclassmen encourages the seniors, who expect Warde to return to its former glory. Kohn eagerly predicts the team will reappear in New Englands in the very near future.

Cross Country is a sport for everyone, but a sport that requires overcoming a wide variety of mental barriers. On a team such as our very own Warde Boys’ Cross Country, a runner has the resources and support to achieve their goals as long as they put in the work – and all the runners this season proved this.