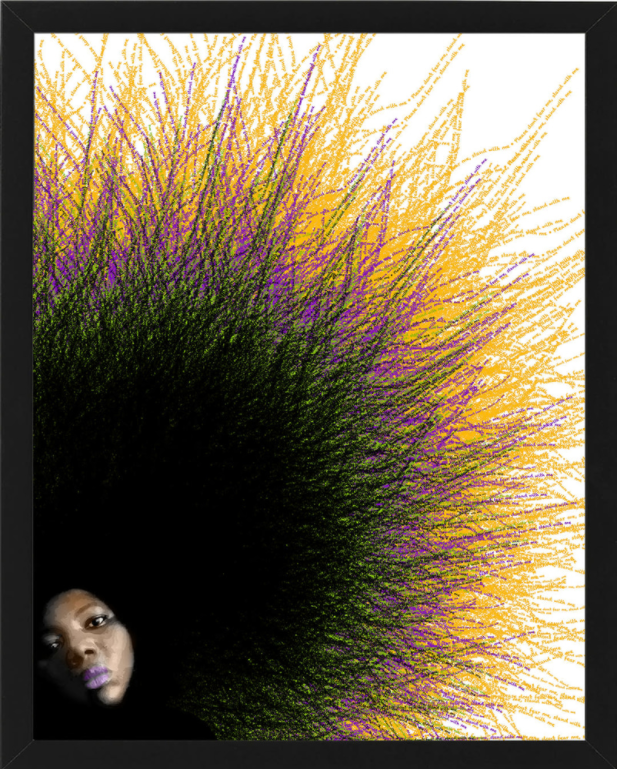 The dark black frame distinguishes the piece from the typical student club flyers that exhaust fleeting occupancy on Warde’s walls. From afar, the subject’s face appears surpassed by her burgeoning hair, which envelopes the canvas. It is only when the viewer inspects closer that the strands of hair no longer appear independent strokes, but conjunctions of an echoed, persistent plea: “Please do not fear me, stand with me.”

“Fear” (digital media on photo paper, W 35” x H 44”) was initially designed by Mursko for the Ridgefield Public Art Center (RPAC) gallery show “Seeing 2020” in August 2020. The piece was inspired by the demonstrations against racism in America and the proliferated attacks of prejudicial and racially charged hate publicized throughout this year.

In describing his work, Mursko detailed that,

“2020 must be the craziest year ever. The thing that affected me the most was police brutality against all people of color. I find it repulsive that anyone is judged by age, sex, or the color of their skin. It’s all racism to me. But to get attacked, injured, or killed is WAY over the line. Fear is the basis of racism. If we actually keep the conversation open and confront our fears things can only get better.”

The piece was discovered by Warde English teacher Mrs. McGlynn in the RPAC gallery. There, she met Mursko and was introduced to his work. McGlynn, a staff liaison for The Anti-Racism Committee (ARC), detailed to Mursko the work of students and staff at Warde towards race relations and equality through vehicles such as the Voices for Equity Club. (Information regarding these efforts can be found in upcoming articles). Upon hearing this, Mursko was inspired and gifted his piece to Warde, hoping to raise awareness for active antiracism and support for continued advocacy.

The Warde community’s response has been positive, albeit quiet, as “Fear” was not publicly announced or publicized. Those who have recognized its addition are intrigued by its message and origin. Others are not aware of its installment. Mr. Whaley, a Warde English teacher, an outspoken advocate against racism, and an advisor of the Warde Voices for Equity Club, is proud to have the painting prominently displayed. He was quick and energetic to bring it to  students’ attention. He believes it “speaks volumes to our commitment towards cultivating representative works in our building.” Mr. Whaley supports this painting and further advocacy for black and brown students, and hopes this provides a “welcoming message of our mission of solidarity, safety, and affirmation.”

Artist Greg Mursko is “glad [his] work is going someplace where the message will be appreciated.” May it invigorate the Warde community with its message of advocacy and understanding of current marginalization, and may it inspire continued work towards progressive change.

Greg Mursko is the co-founder of RPAC Art Center and Gallery located in Ridgefield, Connecticut. He has earned many professional titles including Marketing Director, Creative Director, Account Director, and Art Director, and is a business owner and educator. Greg has over 30 years of studio art and graphic design experience, earning him accolades including Festival International De La Photographie De Mode at Canne, three Ozzie design awards and more.