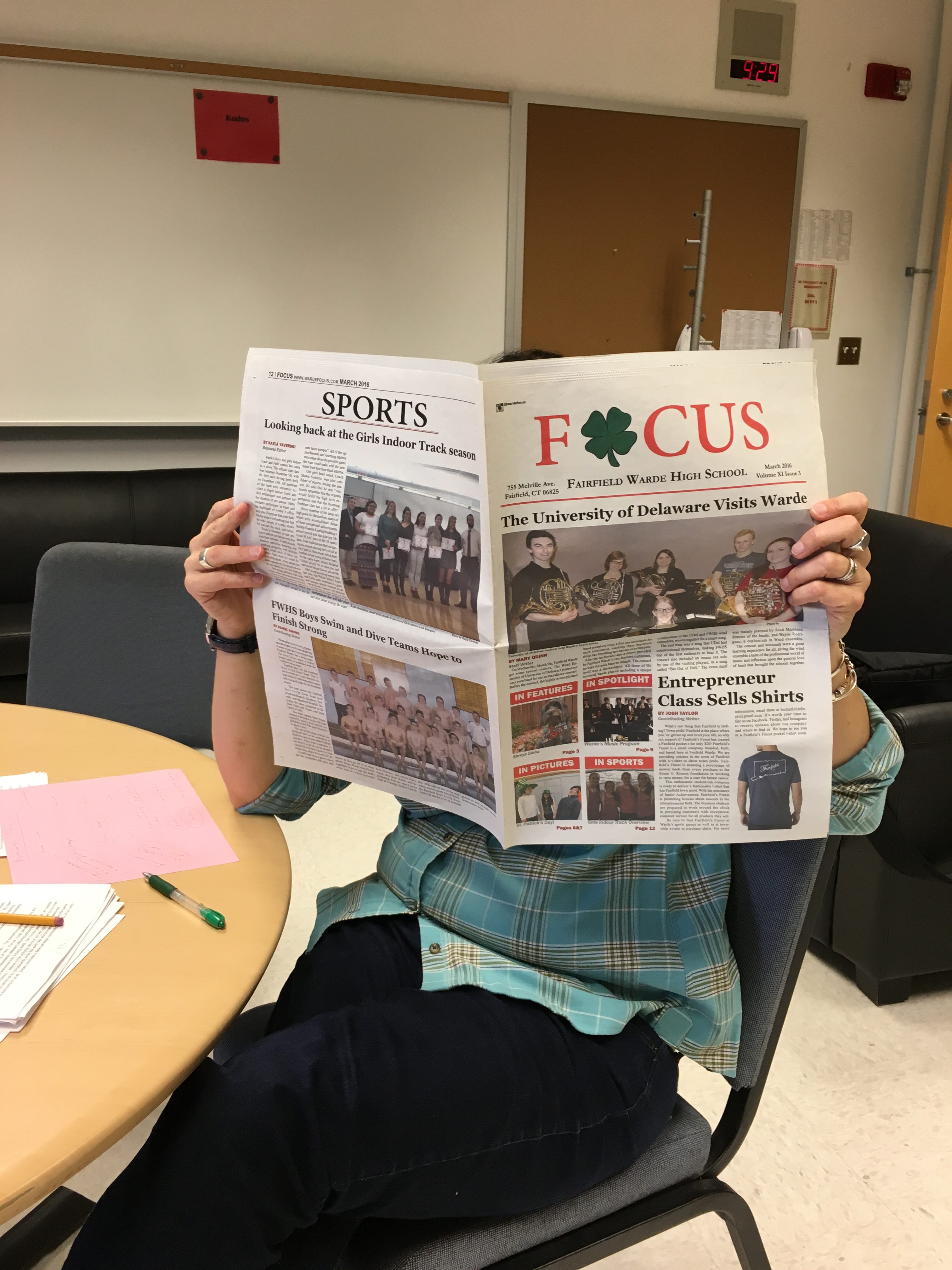 With the epidemic of fake news and attacks on the free press from the executive branch, it is important for citizens to be educated on not just the contents of the news, but how they receive it. In a recent survey by the Pew Research Center, it was determined that 67% of Americans get at least a portion of their news from social media sites, an increase from 62% in 2016. The question at hand: how does this affect Warde students?

Generation Z is notorious, much like their millennial predecessors, for being stereotypically ignorant of the news. “I just hear it from people,” said Sydney Kleinman, a freshman. Senior Olivia Enhoffer echoed that sentiment saying, “When the news is on in the morning I’ll see it, but otherwise I don’t tend to check it.”

It is a complex issue to determine why students are not checking the news, creating a paradox when looking at political involvement. Generation Z is also a part of a growing trend of the “political coming” as coined by analysts at NPR and The Hill, which makes it odd that they would not check the news when they are so intent on changing the political atmosphere. “I tend to ignore it because it’s always so depressing and biased,” says Katie Harris, a Warde Senior. “I’d rather not focus on it.”

Michael McAleese, a junior, responded to whether he thinks that his peers check the news by saying, “I think that a lot of people think [the news] doesn’t really affect them yet and that they don’t have to worry about it since they’re not adults. The news can seem so much like a grown-up thing, that maybe people see their parents do it and therefore don’t want to.”

There is a larger problem at hand therefore before even analyzing how media bias impacts Warde Students; if they are not checking the news consciously in the first place, then they are being affected in a different way. If media bias and the news are deterring students from staying up-to-date though, there is a lack of educated decision-making and action that will follow. The future may see a lack of knowledgeable activists and advocates, creating a cycle that makes the news unappealing to follow. While the news is not supposed to be warm-and-fuzzy for viewers, there should be a way to overcome this negative association so that people are at least educated on what is going on around them.

As for students that do check the news, there is often a consciousness of media bias, but lack of clarity of how to fix that. “Usually I watch the news on TV or I’ll just see things online,” says sophomore Sami Omaish. “I don’t get too much of my news on social media, but sometimes I’ll look on Snapchat.” When asked about his trust in these sources, he said, “I trust what I see on TV more than social media since it’s more reliable. I typically watch CNN, but I’m thinking I should watch BBC more since it’s more trustworthy.”

McAleese commented, “I would say probably I have a positive relationship with my news sources, which is primarily on TV or online alerts. I’m skeptical sometimes and take everything with a grain of salt. I try to see what multiple people are saying about it to get a good perspective since I think it’s good to check the news and stay informed.”

From these comments, it’s clear that even students that check the news know of its foundational flaws. “I generally watch Last Week Tonight with John Oliver or Rachel Maddow,” says Caroline Lauf, a senior who considers herself up-to-date on what is happening in the news. “I’m completely and fully aware that most of the media I watch is biased. It drives me crazy since I like to get a good perspective, but I also don’t find myself trying to watch Fox News for the other side.” As for her hopes: “I would like more of a middle ground since I tend to agree with a lot of what’s being said, but know that it’s not the full story either. It’s hard to find a reliable source.”

So what should students do? “You never know what could be doctored [on social media],” says Lauf, “It’s really important to remember that news on Facebook or Snapchat isn’t as credible as a website. And there is still bias.” Website like Allsides.com which analyze the bias and present a variety of sources on the same topic are a great place to start for those looking to check the news on a variety of topics. This resource is a good place to look at news from the left, right, and center, and therefore sites that show up more often in the center category can be used as reliable less biased sources.

Another tip: don’t just read opinions or op-eds. These articles are directly stating that they will contain opinions and be influenced by personal bias. While they may be good to read after forming one’s own opinion, they are less desirable as a first stop for news. (add thingy)

A final tip: find a news source that works for you. “I tend to check the New York Times mobile app when on the go, and then watch [television] at home. The system works for me,” says Lauf. Omaish has a similar process. “I tend to avoid checking the news on social media while I’m out and about since I’m not always looking to check for bias,” he stated. Obviously these aren’t the only options and there are plenty of credible mobile options, but it’s all about personal preference and making sure you’re getting your information from a reliable, unbiased source.