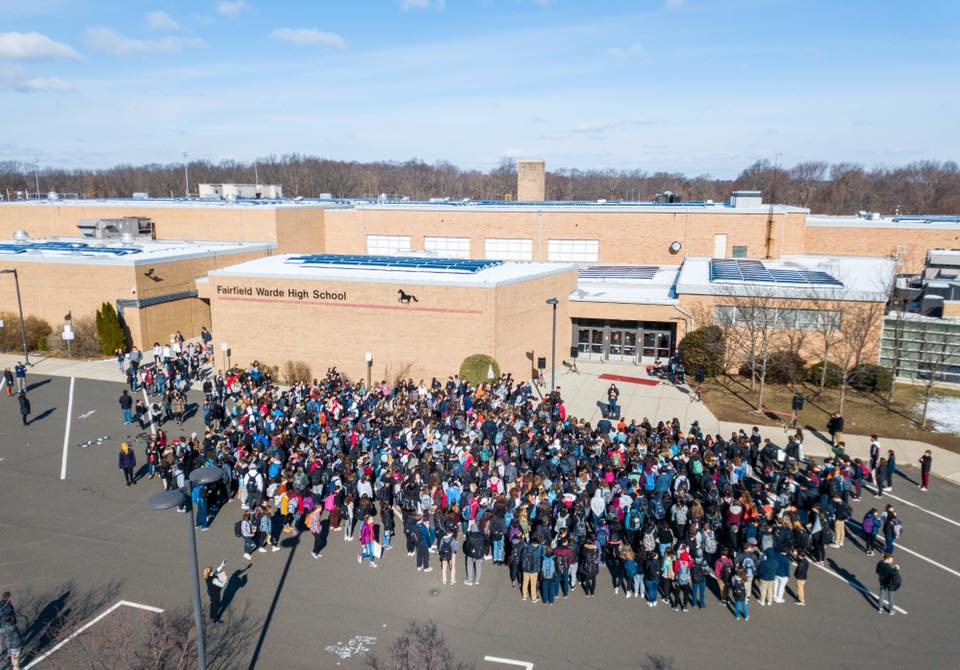 There is often a common sentiment expressed by high school students when it comes to making a difference: “Yeah, but what could I actually do?”

The #NeverAgain movement is changing that.

Inspired by the actions of high school students from Marjory Stoneman Douglas High School in Parkland, Florida where a tragic school shooting took 17 lives, change is in the air. On March 14th, students are going to be walking out of class and even if it’s just for a short 17 minutes, they will be making a declaration: we will not be silenced anymore. Much in line with their persistent nature, these teens seem to have taken a spark and fed the flame, resulting in the March for our Lives on March 24th all across the nation where now the entire nation will be able to join together in the anti-gun violence protest.

But going back to that initial statement so many high school students have said: what can they actually do?

Mr. McGarry, an English teacher at Warde, thinks that students don’t realize the sheer power they have. “If all students were to agree to do something drastic and commit to it, like not show up to school, they would be able to get what they want. It would all be pretty easy, the only problem would be getting everyone on the same page and staying committed to the cause.”

Senior Dheraj Ganjikunta also sees the power in what students could do. “There are so many issues that affect high school students that we often just don’t get a say in. I think what people in this generation realize is that they can’t be passive observers; the system won’t change without their active involvement. High school student protest is just people taking a stand on the issues that deeply affect their lives.”

In light of the recent protests in West Virginia where teachers completely shut down the state’s school when they went on strike for a 5% raise and better health benefits, the impact of a student strike could only be that much greater. However, one deciding factor the governor said made him want to help the teachers instead of directing funds toward other state investments was actually a child who told him that he should invest in the future works of the state for a more productive future. One child had that much impact. Imagine what an entire school could do.

In a world where social media allows for constant self-expression, it is also important for students to realize that this verbalization does not just limit itself to the internet. To carry over the venting on finstas to action in the form of protest allows for students to see how their words have power, an increasingly important thing to see in the era of a fake news crisis. Students already have to cite sources on essays or projects; why should protests, an argumentative “presentation” in itself, be any different?

Along with this, students also need to make informed decisions. Any movement is only as credible as its claims, but it is also imperative that students educate themselves on the issue that they are fighting for or against. One aspect of Warde’s #NeverAgain movement is aimed to target this common problem with reform movements by creating informational pamphlets on a variety of topics surrounding the issue of gun control and offering a chance to talk with other students that have researched the topics during lunch waves on both the day of the walkout and Warde Day.

“We understand that there are always going to be different opinions, but facts are facts. People need to have access to the factual evidence in order to make whatever conclusion from it they’d like. We can people to be well-informed before aligning themselves with whatever ‘side’, not just now, but also in the future. Education is the direct cure for ignorance, and we want to bring it,” says Paola Roach, a Warde senior that is a member of the #NeverAgain movement. The movement’s goal is not just to get students to join them in protest, but also educate themselves on the issues so that they can form their own opinions. These pamphlets also have their sources cited so that students can know where this information came from, building credibility and reliability.

“In my opinion,” says Roach, “Student protest is so powerful because as teenagers, we often feel that we don’t have a voice or a say or that no one is listening. However, protesting is the surefire way to be heard and make an impact.” Ultimately, Warde students have more power they think they do. The presence of the #NeverAgain movement at school is proof that time for change is now, and the instigators of this change will be students.