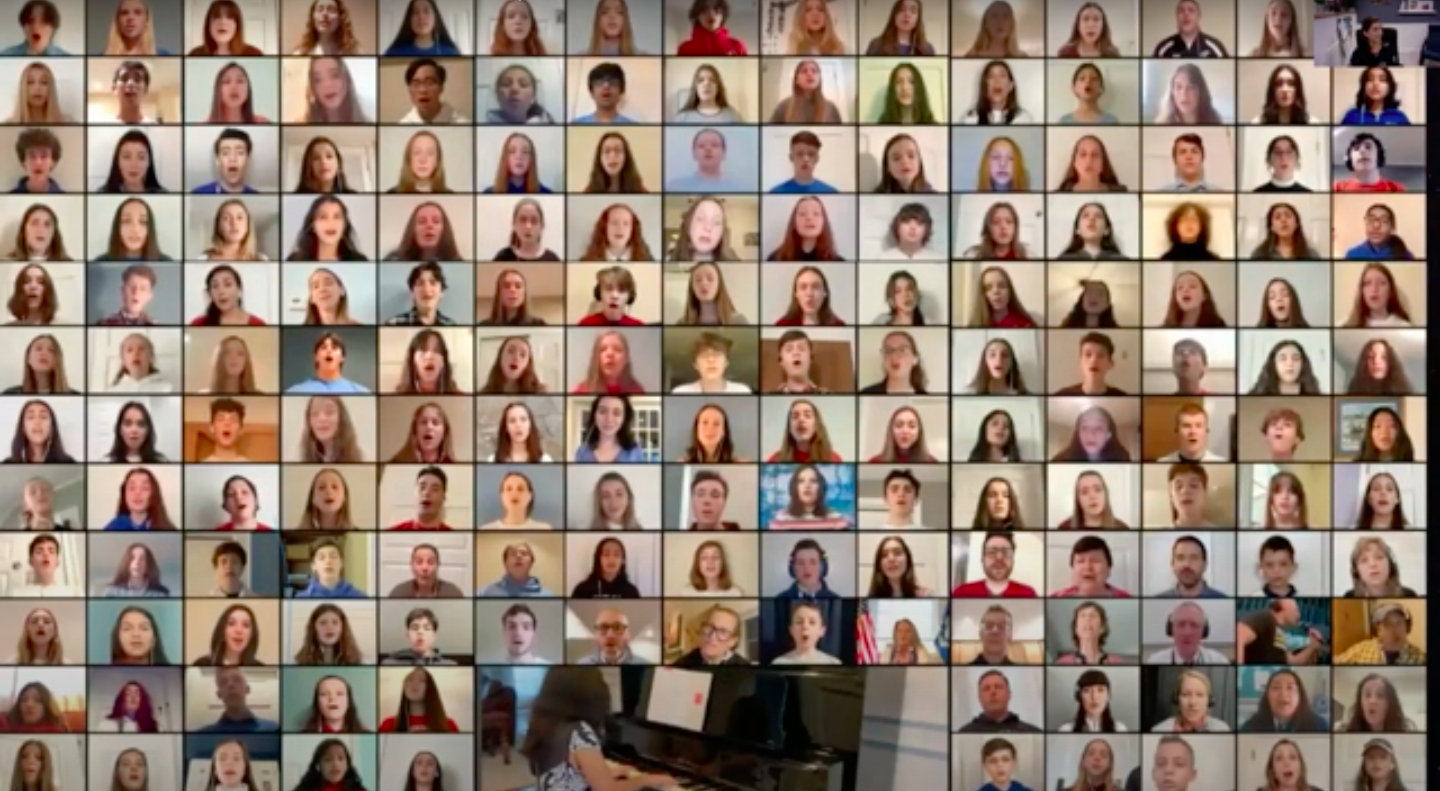 On Thursday, June 3rd, at 7 p.m., the work of Warde’s choir program over the course of the year came to fruition. Alongside a group of students from both schools, Warde and Ludlowe choir directors Mrs. Verney-Fink and Mrs. Pine led a presentation to nearly 300 participants over Zoom. Music with deep ties to historical content and movements regarding the injustices Black people face both nationally and worldwide were virtually presented. Families, students, and many members of the Fairfield community participated. During this display, known as Music of the Movements, students from both schools and across grade levels combined to present musical selections, inspired by what began as a unit across the choir department to educate students on the impact of racism on the past and its presence today. This was conducted alongside elaborations and insights from students themselves.

It was less of a concert and more of a demonstration: one of the greater understanding gained by all students of the hardships faced by minorities in the United States over the course of history.

The presentation gave students the chance to display the technique and emotion with which they have come to sing – the songs “I’ve Been Buked” and “A Change is Gonna Come” were performed by Warde and Ludlowe soloists Emma Portnay and Justin Do, respectively. Both the Warde and Ludlowe a cappella groups were able to present their performances of the more modern tunes “Rise Up” and “Preach”. The finale of the presentation was an arrangement of “We Are the World”, in which all members of the Warde and Ludlowe choir departments contributed their voices alongside members of both the school and Fairfield communities, including Warde’s principal Paul Cavanna.

Some of the principal questions that were to be answered over the course of the Music of the Movements unit were as follows: How does one define protest music? Why might music such as protest songs be created during times of unrest? Has protest music changed over time? Students were given opportunities to reflect upon these questions and formulate responses upon their learnings. Some of these responses were presented to the audience during the presentation.

Sarah Genovese, a featured presentational speaker, soloist, and leader in the Warde Voices for Equity, found the experiences of the presentation and units themselves to be positive ones.

“I thought that learning the history to a lot of the protest songs from today and from the civil rights movement was really beneficial because it really opens up the eyes of non-music kids how significant music is and how there’s always a story behind a song,” she said. “I think this emphasizes how significant music is in a time of unrest, and how it’s used to keep people persisting.”

A value held close over the course of these explorations was the necessity of preserving history; the integrity of each piece was performed through careful consideration and study. The worry of cultural appropriation was always present, with teachers and students alike expressing the importance of understanding the content.

“I think it’s important we learn about the stories behind the songs we sing because we really want to make sure we know what we’re singing about… We really want to make sure we’re not appropriating the music especially if it’s from an artist that’s a Person of Color or is a different religion, ethnicity, et cetera. Learning the history behind songs also opens our eyes up to greater perspectives, and I just feel like as a musician it’s the right and respectful thing to do,” Genovese reflected.

It is a hopeful possibility that the other educational departments in Warde, Fairfield, and beyond will follow suit in these efforts.

“I think next steps would be to further this type of education in other classes like reading novels written by people of color surrounding their heritage, learning more about different cultural histories in history classes, et cetera,” said Genovese. “We really need to teach our kids all sorts of history and not something so standard like white European history.”

This year more than any posed roadblocks to the choir department. The hybrid learning model put in place for the first half of the 2020-2021 school year rendered it impossible to conduct full choir rehearsals. The assurance of having multiple people at one’s side, singing the same part in support, is nonexistent when practicing from home. Choir, being an activity that heavily relies on unity and teamwork, had to come up with innovative solutions to maintain the curriculum and recreate that sense of community for both returning and incoming members.

The Music of the Movements presentation can be seen as an accumulation of both the effort and stride with which the FPS Choir Program has taken this year and the rising acknowledgement of the necessity for change in communities both large and small. As the choir department’s last act of the year, all involved and who witnessed the presentation can affirm that it was a success.