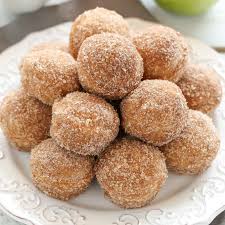 Hello to all! Welcome to my brand new column, The Barlow’s Perspective with me, your host, Jack Damon. To anyone who doesn’t know me (which is some of you) I am a senior a part of the food services course at Barlow’s.

Every month I will be sharing both staple and special Barlow’s recipes that you are able to cook at home. Soon you’ll be cooking like a master (like me) and maybe gain a love of cooking that can rival mine.

So for this issue, I just wanted to go with a simple recipe for all those beginners out there  everyone could love.

Picture this. You’re in your mom’s kitchen, then suddenly the blissful scent of apples hits your nose. You walk into the kitchen and you see 24 delicious apple cider doughnut holes, fresh out of the oven. Then your mom says “Do you want to help with the cinnamon sugar coating, it would be a big help.”

So with that thought in mind, you get the donuts all rolled up in cinnamon sugar with butter to help the sugar stick. These donuts are a delicious and very sugary start to any day, not to mention that they’re baked instead of fried to add a nice (if overshadowed) healthiness to them. Now, let’s get cooking!

Coated in either cinnamon and sugar or an apple cider glaze. Plus instructions for how to make regular Baked Apple Cider Doughnuts too!

For the apple cider doughnut holes:

For the cinnamon sugar coating:

To make the doughnut holes/doughnuts:

To make the cinnamon sugar coating:

1. Add melted butter to a small heatproof bowl and set aside. Start with 4 tablespoons and melt 1-2 more tablespoons of butter if needed to coat all the donuts (you most likely won’t need to do this step but do it just in case).

2. In a separate bowl, mix together the granulated sugar and cinnamon until well combined. Take each donut and dunk them into the melted butter, making sure it is fully coated. Then dip it into the cinnamon sugar mixture, making sure to coat well. Repeat until all of the donut holes are coated, then serve and enjoy!